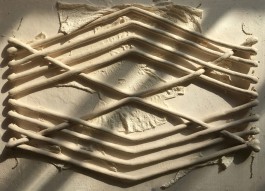 Lyset fra stjernerne bøjes for Solen is a series of ceramic diagrams, made by using the ancient technique sprang, where threads are interlinked into each other in patterns. Each pattern is made from the principle of using eight threads in length and two strings for crossings – creating variations on patterns. The diagrams displays possible variations made from this system.

In the Inka empire quipu knots on strings was used as a recording system. The knots were encoded with numeric informations in a complex language recorded in a three dimensional system.

the National Gallery of Denmark´s collection since 2021, Copenhagen

Divisible Light is a series of clay sculptures. The sculptures are weavings in clay that appear as diagrams of geometrical patterns. Quipu knots were used in prehistoric times as a recording language, instead of numbers and words they used knots. Like the Quipus, the sculptures are made of knots and relates to semantics, language, and sound. Divisible means capable of being divided, as when lightwaves divides through a prism. I use division as a principle for creating the patterns.